On a recent summer’s evening, a shimmering metallic object appeared in the skies above the city of Hangzhou in eastern China. Gliding across the dusky sky, the craft startled locals and frightened air-traffic controllers, who promptly closed Hangzhou’s busy airport and locked down the city’s airspace for more than an hour. News of the Hangzhou UFO even made the national news.
But when amateur pictures of the craft were splashed across Chinese newspapers the following morning, experts quickly determined that Hangzhou was not under threat of an imminent alien invasion. Rather, the flying object was identified as most likely being another example of an increasingly common nuisance in China’s airspace: off-the-grid, short-hop flights by local private-plane owners. China’s airspace is tightly controlled by the government, and access for any crafts other than commercial or military aircraft is strictly limited. But as planes and helicopters become the new playthings of China’s wealthy elite, private-plane owners are agitating for more freedom to fly, and hei fei, or black flights, are becoming a headache for the nation’s air-traffic controllers.
(See the best-selling cars in China.)
It was not until 2003, when the General Aviation Flight Control Ordinance was issued, that Chinese individuals and private companies were even allowed to own private aircraft. China now has about 200 aircraft in private hands, according to some estimates — impossibly low when compared to the U.S., where the General Aviation Manufacturers Association estimates that there are some 231,000 privately owned airplanes. How many of China’s private fleet are airborne on a regular basis remains unclear. Currently, private-aircraft owners need to jump through a myriad of regulatory hoops if they want to fly their planes or helicopters. Would-be flyers need to apply to several different local and national ministries and departments to get the appropriate licenses and must submit detailed flight plans to the local air-traffic-control department at least seven working days in advance.
Rather than wade through this bureaucratic minefield, some simply choose to fly “off the grid” and not submit flight plans or check in with nearby air-traffic controllers before taking off. Though it’s illegal, flying under the radar has a distinct advantage: according to China’s civil-aviation laws, the fine for illegal flying is 10,000 to 100,000 renminbi, while an application for official flight-path approval can cost anywhere from 50,000 to 100,000 renminbi. Many choose to simply pay the fine, but their flights can cause pandemonium when the planes crop up on airport radar screens. In April, some flights into Shanghai were briefly diverted to other nearby cities when an unregistered helicopter strayed into the city’s airspace.
(See pictures of China’s high-speed rail.)
In a country that had 1,900 billionaires last year, aircraft makers and sellers are betting on private flying taking off. Last week at Shanghai’s Hongqiao Airport, the country’s first Jet Expo gets under way, showcasing 10 private jets worth a total of 1 billion renminbi. “There are two kinds of people who come to our exhibition — people who are fond of flying, and very wealthy men,” says Wei Gong, the director of the Asia-Pacific area of Celink Limited, the organizer of the Jet Expo. “We have a cocktail party in the evening where we’ve invited 80 people with a net worth of more than $50 million to attend.”
(See 20 reasons to hate the airlines.)
But as the market grows, so does pressure to relax regulations on private flights, and there are signs that the government is starting to respond. Owners of larger jet planes, for example, need only submit their flight plan 24 hours in advance — as opposed to weeks in advance for smaller craft like single-engine planes. In Guangdong province and certain areas of the northeast, local governments have allowed single-engine planes to fly at low altitudes. Analysts — and people in the aviation business — believe that such test schemes presage a larger-scale opening of airspace sooner rather than later. “[Restrictions on airspace] have very little impact on our business, because everybody sees that the government is trying to loosen their control over the airspace,” Gong says. He’s advising potential customers to buy now so that they’ll be ready when the regulations are relaxed. “It takes at least half a year from the time you order your plane to delivery. So maybe in six months, the policy will be changed already, and private planes can fly without too much hassle.”
Plane owners in the meantime are working to improve their image as wealthy flyboys who ignore the rules. In July, Liu Boquan, a prominent hotel owner in Dongguan, garnered plenty of praise — and plenty of headlines — when he took to the skies in his helicopter to apprehend a band of thieves. The bandits had apparently made off with his Porsche, but Liu was able to track them from his chopper, cornering them at a nearby fish farm — where, in a Bond-esque plot twist, one made a getaway and Liu took to his speedboat to round him up. Using his helicopter may have been a hei fei, but even the local government had to acknowledge that Liu’s illegal flight was not without benefit. He was later given an award for outstanding behavior for his role in capturing the thieves. 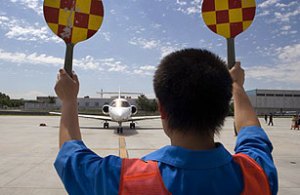